A short history of the Australian Bird Study Association

The Australian Bird Study Association (ABSA) had its roots in the formation in 1962 of the Bird Banders Association of N.S.W. (BBA).

The impetus for creation of the BBA arose from a meeting held at the Old Council Chambers in Lane Cove on 24th March 1962. That meeting was arranged and chaired by S.G. (Bill) Lane to address a growing feeling among New South Wales (NSW) banders that they should get together to discuss progress on the relatively recent introduction to Australia of capture and banding of birds as an ornithological research technique. Banders needed a means of discussing results of their banding activities, encourage cooperation and address mutual problems.

43 persons attended that first meeting. At its conclusion it was resolved that an association be formed “with the aim to stimulate the fellowship of banders as a group; to gather and distribute as much information as possible on the technique, results and literature of our common interest; and to provide a mutual service which will assist us all.” Bill Lane was chosen as the first President and was charged with co-opting interested parties to get the organisation off the ground. A more detailed account of that formative meeting can be found in the first Newsletter that was titled “The Bird Bander – Organ of the Bird Banders Association of N.S.W.” Vol.1. No. 1.was published in July 1962 and a copy is available on this website.

By the time the second Newsletter was circulated in October 1962 a number of interstate banders had become members of the NSW association. Many of these felt that the organisation should communicate with and represent all Australian bird banders and that it should run in parallel with the Australia-wide banding scheme, which at that time was managed by the Commonwealth Scientific and Industrial Research Organisation (C.S.I.R.O.). Subsequently, at its first Annual General Meeting on 1 December 1962, the organisation was renamed the Bird Banders’ Association of Australia and the newsletter was retitled as the journal of the organisation.The journal was again renamed from Vol.2 No.1 in March 1964 when it became “The Australian Bird Bander” (ABB). All 14 volumes of ABB are available on this website.

In the 1960’s there was a dearth of published information at the disposal of, or in a format suitable for researchers to take into the field, “on plumage variation between sex, due to age, or main points between similar species”. Accordingly, one of the first innovative steps undertaken by the new association to assist banders in field work was the publication of a series of papers initiated by H.J. deS. (John) Disney, the then Curator of Birds at the Australian Museum, Sydney, titled “Bird in the Hand” – a title borrowed from a series of pamphlets produced for similar purposes by the British Trust for Ornithology.

The first of these papers was published in ABB Vol.1 No. 4 and covered the diagnostic plumage characteristics of the Magpie Lark. Further articles in the series followed in quick succession covering the topography of a bird; measurement techniques; Treecreepers; Eastern Spinebill; plumage differences between the Fan-tailed and Brush Cuckoos; diagnostic characteristics of the Collared Sparrowhawk and Brown Goshawk; the Striated and Brown Thornbills; Wedge-tailed and Short-tailed Shearwaters; and the Bronze Cuckoos all in Volumes 1 & 2 of ABB. These papers were very popular as they provided considerable assistance for banders to identify, age and sex many species – information that was not available from any other easily accessed source. Similar papers in the series were regularly published over the next decade and culminated in the publication of the book “Bird in the Hand” in 1974.

In March 1973 the first in a series of articles was published to document the importance of numerous offshore islands around the Australian coastline for breeding seabirds. These articles were titled “The Seabird Island Series” and commenced with an overview of Bird Island, off the NSW central coast. Over 260 islands have now been covered in this series and they have proven to be of immense value to seabird conservation. All of the papers in the series are available on this website.

The “Bird Banders Association of Australia” changed its name in 1977 to “The Australian Bird Study Association” to better reflect its desire to promote and publish the results of a far greater scope of bird research than just those studies that involved some aspect of catching and banding of individual birds. It concurrently changed the name of its journal from “The Australian Bird Bander” to “Corella”. Thirty-eight volumes of Corella have been published up to and including 2014.

In the early 1990s the Association commenced publishing a Newsletter which was sent out with each issue of the journal until 2012. Since then, as a cost saving measure, the Newsletter has been published only on the website. To reduce printing costs further and to maintain a reasonable subscription rate, from 2014 the journal Corella has also been published online. However, a hard copy of the volumes published online will be sent to each subscriber in December each year. Copies of all back issues of Corella, except for the last two volumes, are available from the website. The last two volumes of Corella are available only to subscribing members of the Association. However abstracts of the papers published in each issue are immediately provided on the website and are available to all that may visit.

In 2012 the Association introduced a new initiative that was developed to encourage banders to publish their research results, particularly from co-operative banding sites. These Banding Reports must follow a set format, with a summary being published in Corella and the full report is published on the Associations website.

Another service that the ABSA provides is the import and sale of research equipment, such as mist nets and other high quality instruments, through the Mist Net Service. Mist nets were originally imported to Australia in commercial quantities with the approval of the Department of Customs by the Central Bird-Banding Association (CBBA) that was set up in Canberra by Steve Wilson in association with the CSIRO in January 1962 with the express purpose of providing good quality nets to Australian banders. On 1st July 1963 the CBBA merged with the BBA and the Mist Net Service of the ABA (now ABSA) was born.

In recognition of their valued contributions to the management and achievement of the objectives of the Association, a list of those persons who have served in executive and other official roles of the Association since its inception in 1962 are provided elsewhere.

There are numerous benefits to be gained from joining the Australian Bird Study Association and these advantages are also outlined elsewhere. 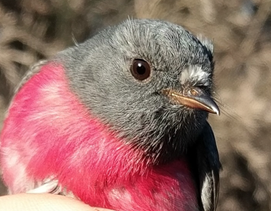